This is a pinned message box

This article was moved to /hell/ as it seems to be a sloppy article. The text for this could just be moved to the OwlMan article as a subsection.

Man Mad Font (also know as "Man_Man_Font"), is a font that was made for issue number six of the OwlMan Comic by English Neocities user, OwlMan. 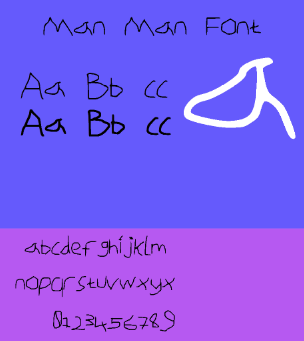 The font was first used by an unknown homeless looking character, who was preaching about how "the end of the comic is coming". The comic was first published on the 30th of May 2016, to little to no success.

In January 2018, OwlMan made an archive of the font. On the archive page, OwlMan wrote that it was "A shitty font from a shitty WebComic".

In total this page has had 0 updates since it was uploaded.